Several researchers have argued strongly for the need to account for social and cultural benefits alongside the economic contributions of music and other art forms (Arts Council England, 2014; Behr, Brennan, & Cloonan, 2014). Although difficult to measure directly, these benefits are real and may manifest in a number of ways including improved productivity, a greater sense of wellbeing and increased social capital (Carnwath & Brown, 2014).

The link between performing arts experiences and health and wellbeing is well established (Carnwath & Brown, 2014). Music in particular has been shown through clinical research to effect immunological response, although more research is needed into how this functions (Fancourt, Ockelford, & Belai, 2014). Music is often used as a mood manipulator by advertisers and retailers (North, Hargreaves, & McKendrick, 1999), and people frequently use music for ‘emotional self-regulation’ (DeNora, 2000). Active engagement with music has been shown to increase positive perceptions of self, which in turn leads to greater motivation, manifesting in turn in enhanced self-perceptions of ability, self-efficacy and aspirations (Hallam, 2005, 2010).

It has also been demonstrated that school-age students who participate in musical activities are more socially active, and engaged in conversation with adults (parents, teachers et cetera) more readily. This suggests that the higher social functioning of musically active students is likely to result in higher self-esteem and, therefore, increased motivation and self-efficacy (Broh, 2002; Lillemyr, 1983; Sward, 1989). One implication of this is that experiencing live music may also have a positive benefit on productivity. 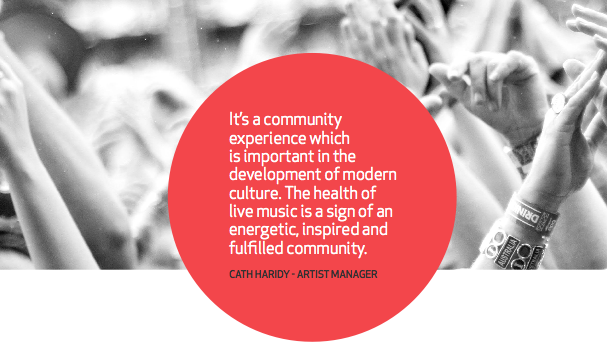 The benefits of live music participation are not limited to young people and students. Live music performance has been shown to alleviate apathy and improve quality of life among dementia subjects (Holmes, Knights, Dean, Hodkinson, & Hopkins, 2006); and an experiment into the effects of the participation of seniors in an ongoing chorale group observed that positive health outcomes occur when older individuals are in situations that provide meaningful social engagement with others (G. D. Cohen et al., 2006).

Similarly, a long-term Swedish study into the correlation between attendance at cultural events (such as live music performances) and survival rates has further shown that those who frequently attend such events live longer than those who rarely attend (Bygren, Konlaan, & Johansson, 1996).

Indeed, in a follow-up report, it was stated that, “People who rarely attended such events ran a nearly 60 per cent higher mortality risk than those attending most often, after adjusting for a range of possible confounders” (Johansson, Konlaan, & Bygren, 2001).

Live music has also been recognised as contributing to a sense of community, meaning and attachment to place (S. Cohen, 1999; Gallan & Gibson, 2013; Long, 2014). Live music is a communal event that incentivises like-minded individuals to gather, and “provides a sense of community that is not present when listening to music alone” (Black, Fox, & Kochanowski, 2007). The informal nature of the industry “blurs the business-social divide,” (Watson, 2008) levelling the importance placed on social and business relationships to an equal standing. This is thought to be true of cultural and creative industry workers in general; as the long hours, socialising with other creative workers and the spill over between work and play generates a strong community (Pratt, 2000).

A societal risk of such attachments is that the reliance of music scenes on social and subcultural capital can lead to systems of exclusion, as music scenes take on aspects of tribalism, which might make participation in these scenes difficult for outsiders (Harrison, 2010). It is generally argued, however, that the negative effects of group dynamics generated by music scenes are outweighed by the positive contributions to a sense of community and belonging that live music events create (Garrett, 2010; Hoffman, 2012; Welch et al., 2014).

The cultural value of live music, and in particular the venues where live music occurs, can be observed in debates around cultural policy, licensing regulations and the residential development and gentrification of inner-city suburbs where live music occurs (Gibson & Homan, 2004; Holt, 2013; Homan, 2010; Lobato, 2006; Shaw, 2009). There is clear evidence that cities such as Austin, Manchester and New Orleans, benefit from their reputation for live music through tourism and related flowthrough to their local economies (Flew, 2008; Homan, 2008; Long, 2014). Place-based symbolic capital encourages migration of consumers and producers, as the appeal of a vibrant live music scene draws creative individuals and music lovers from other regional and urban centres.

In Australia the cultural value of live music production to governments has been signalled through the establishment of live music precincts and agent of change legislation (Homan, 2008, 2011b). Protests around the closure of iconic and long-established venues demonstrate that sites of live music performance and heritage are of some value to audiences of live music, and probably ‘non-users’ alike. For example, the SLAM rally of 2010 to protest the closure of the TOTE (a popular live music venue) remains the biggest cultural protest in Australia’s history (Walker, 2012). How this might be quantified in the context of Australia’s live music sector has not been sufficiently articulated, however, recent research is beginning to provide insight into how this can be achieved.

Six years into a longstanding investigation into the value of the live music industries in the UK, Behr, Brennan and Cloonan (2014) argue that qualitative data is essential for providing a complete and nuanced picture of the value of live music, and in particular “those areas in need of support” (p,3).

They also demonstrate a maturing understanding of the complexity of the markets for aesthetic labour, and recognition that such complexity cannot always be captured or represented through traditional economic analysis. Earl’s (2001) argument that economic analysis of live music in Australia has not sufficiently engaged with the measurable and quantifiable, cultural and social benefits remains undisturbed by the passage of more than a decade. Their at best limited engagement with qualitative producer and consumer accounts of live music activity represent an incomplete picture of the live music sector.